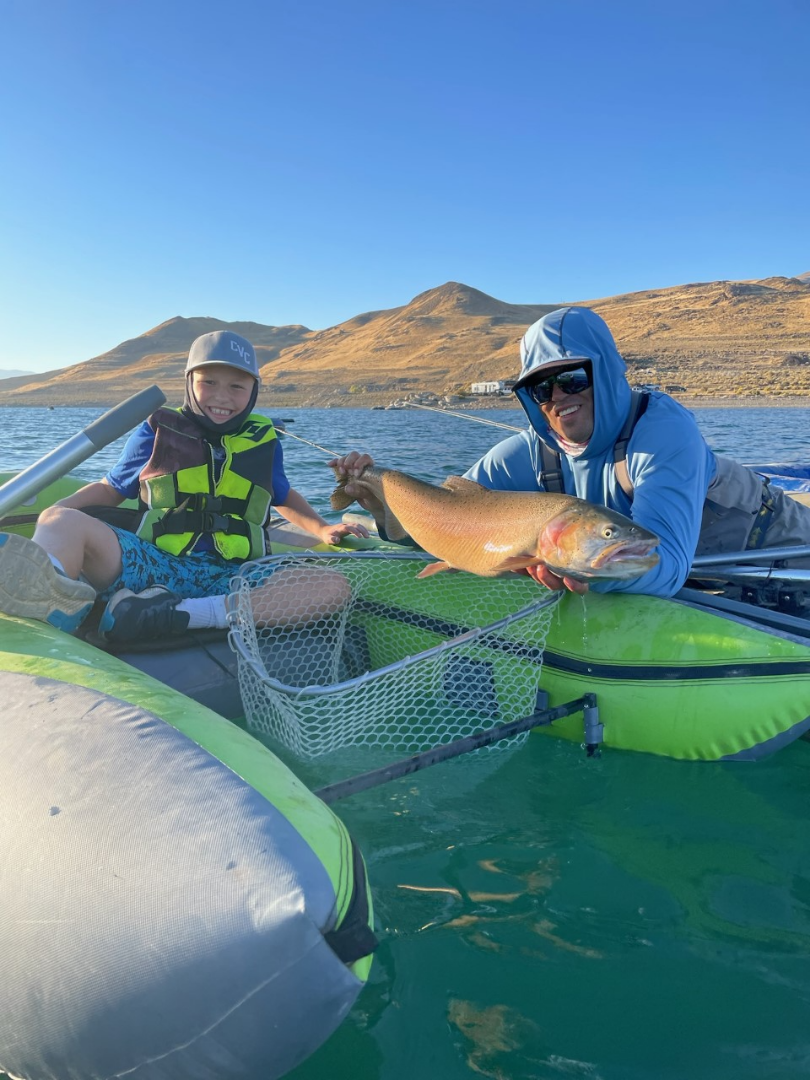 I’ll tell ya what, Old Man weather just knocked on our door at Pyramid Lake.

Winds, could fronts and overnight lows are dropping the water temps and that is causing the thermocline to spread out and spread the bait and fish out.Is the lake turning over ? It has to sooner then later. What’s that mean ? that means the fish will start coming to shore due to the colder water below coming to the upper water column. Give it a couple more storms and it’s game on, grab your ladder. Last year,  November was a good month.

Before the high winds fishing continued to be fun for those who could get offshore in watercraft. Find the bait, find the fish, get your offering in front of em and BENDO’ ! Fish up to 25 lbs. were caught this week again. Just don’t miss your bites. Fishing deep or vertical isn’t as easy as you think to detect strikes. You have to watch your line.
Fly Fisherman:

Stripping Deep: The top flies have been heavily weighted olive and white or white and gray Tui Chub patterns. Match the hatch. Bring your 8 wt and stick to 15+ lb flouro carbon leader, these fish are fired up. Best beaches/deep drops right now are Pelican and Warrior
Conventional Anglers:

Trolling: Headed to Hell’s Kitchen or Anderson Bay, look on your electronics, put on a Dirtee Dancer plug and pull it through the fish. Vary your speeds until you find what the fish want. Down riggers are the cats meow but you can also use leaded line or 2+ oz banana weights.
Don’t rule our spoons, they are accounting for catches as well. Bleeding Frog or Blue and Silver are the top patterns right now.

Jigs: The good ol marabou jig, 1/4 oz-1/2 oz in white or white and chartreuse is bending rods. I’ve been playing with a soft plastic bait “somewhat like a tube bait” from Hook Up Baits and I’ll tell ya what, they are on to something. They are fun to fish shallow and deep. They fall way slower then a jig. They almost glide which mimics a wounded baitfish perfectly. While working the deep water I would drop it through baitballs, feel the lure go through the bait balls and then it suddenly stops, set the hook and BENDO, bit on the drop.
Spoons: Cast, countdown and wind with a pumping action.

Season is winding down for the Eastern Sierras which means it’s time to convert your tackle over for Pyramid.

Any day you can get on the lake you have a chance at a trophy. You can’t catch em from the couch.